How SPOTROCKER works for Users

SPOTROCKER is the unique portal for ad contests, where users produce, vote and directly distribute own ads for brands, and in the process both producers and voters are rewarded. Key is, that it is less about producing high gloss ads but more about the idea, authenticity, credibility, impact and viral potential of the ads.

Brands launch competitions in the form of briefings (campaigns). Users produce ads in line with these, or rate the ads others have produced. Ultimately the best ads and the most active voters win prizes. Users get great cash prizes and build up references, reputation and direct contact with the brands, with no application processes. Independent of their background, film and media makers or ad and marketing-savvy users can participate on an ongoing basis in real, specific media projects.

Note: Until November 2020, all campaigns were exclusively about commercials (videos) – now the media spectrum has been expanded, so there are now Cinemagraph / Photo / Meme campaigns as well.

In order to take part effectively, you first need to register – a straightforward process via email. This gives you full access to all campaign content, allowing you to participate as a producer and voter, entirely free of charge.

A campaign represents the contest launched by the brand and consists of several phases. Here, there is differentiation between public and private campaigns. In comparison to public campaigns, private campaigns essentially provide limitations to the visibility and accessibility of specific elemental components.

Public campaigns start with the “Upload and Vote” phase: The briefing is published and ads can be uploaded. The ads are reviewed and, if successful, are published so that they can then be voted on, shared and commented on in this phase. This is followed by the “Vote and Share” phase: At this point no more ads can be uploaded, but all other actions are still possible. This serves to ensure that the more recently submitted and published ads get sufficient time (approx. four weeks) and opportunities to build up their valuable statistics (views, votes, shares, etc.). This is then followed by the approximately two week “Awarding” phase, when the brand decides on the winners (Rocker Awards), taking into account the video statistics. During this time, the campaign is ended and prizewinners rewarded, thus the Rocker and Voter Awards are announced and become directly visible publicly. Naturally it is still possible to vote, etc., and these votes will still flow into the awarding process as long as the campaign prizes have not yet been awarded. When the campaign is then concluded, the cash prizes are credited within the scope of this process to the winners’ accounts on the portal and transferred to their real bank accounts by means of a payment demand.

Private campaigns involve a slightly different sequence, with the particular difference being that the ads are not initially published and must be treated confidentially, hence there is no interaction with other users. This begins with the “Uploading” phase: The briefing and the ad upload are available following a short separate and successful activation process. Submitted ads are reviewed and, if successful, are approved internally, whereby only you as the submitting user are notified, because even when the ad is approved, it is still to be handled as confidentially as before. This is followed by the “Checking” phase: At this point no further ads can be submitted and the most recently uploaded ads are reviewed for internal approval. This phase takes around three weeks. This is then followed by the approximately two week “Awarding” phase, in which the brand decides on the winners (Rocker Awards). During this time, the campaign is ended and the Rocker Awards are announced, so the prizewinning Rockers, not the ads, become directly visible to the public. Nevertheless, during this process and/or at the end of the campaign, we may make the decision on our side to publish ads or not, but only at this point and not before.

The first and most important thing is to carefully read, understand and implement the briefing, grasping the overall picture and taking note of the details. Then upload your ad before the deadline. In fact, to be on the safe side, we recommend doing this as early as possible in order to be able to take action if necessary. This applies equally to public and private campaigns.

In the case of public campaigns, the ad submitted is initially reviewed before any possible publication, and the release process generally lasts approx. seven working days. Of course, this release process also applies to ads which are submitted lastly, whereby there are naturally successive publications after the deadline too. If your ad is published, then you will take part in the Rocker Awards. Which ad get which placement, is ultimately decided by the brand. This means the brand makes the final decision about prize giving in the overall context, taking into account the ad statistics. Alongside this, it also applies that: If an ad wins a prize, it only needs to have a brand voting of a minimum of 3.0 to get the full payout, if the figure is below this then the ad will nevertheless receive 25% of the payout. At the same time, in the case of dubious, inappropriate brand voting, SPOTROCKER has the right to a say in the matter.

If a campaign is private, essentially the only difference in the way it is executed is that it is not about a publication but about an internal approval. That means that whether a ad successfully participates in the Rocker Awards or not is revealed through internal approval, of which only you as the submitting user are informed.

By the way: You can even participate with up to 3 ads for each campaign provided that these differ significantly enough.

In advance: This does not apply to private campaigns since for these no ads are published during the ongoing campaign, hence user voting is not possible, so that there are no Voter Awards for private campaigns.

In the case of public campaigns, you can also participate without an ad, namely by voting for other users’ ads before the deadline, i.e. before the campaign has ended. This way, you take part in the Voter Awards and the placement you are allocated at the end is determined by the activity index you have when the campaign ends. The higher this is, the higher the chance of a better Voter Award placement. The activity index is compiled from the points you have accrued for various actions on SPOTROCKER – i.e. for such activities as sharing campaigns and videos, viewing and commenting on ads, inviting friends, etc. The activity index is volatile here, i.e. it changes depending on how often and how much you do on SPOTROCKER. If you are inactive for a while, this will have a corresponding effect and your activity index will fall. In order to keep it high and/or to boost it, you simply need to be active – i.e. vote, share or comment, for example.

By the way: When voting via iPhone / iPad, it may be necessary to press the stars twice to be accepted.

This is an additional feature that brands can apply in their campaigns. Where this feature is used, the following applies: With the production budget, a performance oriented advance prize giving is carried out for approved or published ads (in other words: a downstream production budget).

The sequence is as follows: Each ad that is approved internally or published received a brand voting immediately beforehand. With this approval, the ad gets a share of the production budget still available, with the amount of its brand voting multiplied by the given factor. Example: A brand voting of 4.25 with a factor of 100 means an allocated production budget of € 425. This amount then belongs to you independent of the Rocker Awards!

The principle here is: first approved, first served. The budget is gradually used up and is allocated at the point of approval and/or publication where sufficient budget is still available. This means it may be that the most recently budgeted ad does not get the full budget in line with its brand voting, but receives less because too little remained at the point of approval and/or publication. It may also be the case that the budget is not completely used up.

The budget amounts received are credited to your winner’s account and you can then request payout to your bank account immediately. In short: It is therefore highly recommended that you submit your briefing compliant ad as early as possible in order to then get approval or publication of your ad as early as possible too, so you can thus secure your share of the production budget.

Of course in this context too, you can participate with up to three ad as long as these differ significantly enough.

Archived material and/or stock footage may be used, but only that which corresponds to our user conditions, particularly in relation to granting of rights. Alongside commercial use, this also covers (among other things) the fact that no kind of copyright statements must be made and the material is free from any collecting societies (e.g. exempt from GEMA charges). Particularly suitable material here is any that comes under the Creative Commons license “Public Domain” and/or “CC 0” (a CC BY license is not possible due to mandatory endorsements/credits). A list of sources suitable for SPOTROCKER can be found here: https://www.spotrocker.de/stock-material

Join in! Create your ad and win!

This is how SPOTROCKER works

Easy, ingenious, profitable – for everyone! 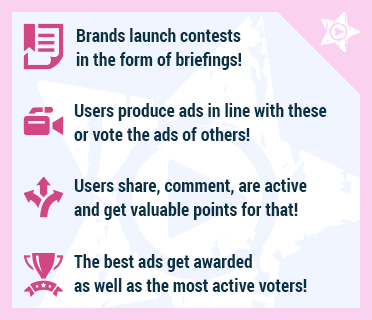 Super! You are awarded for spot view.